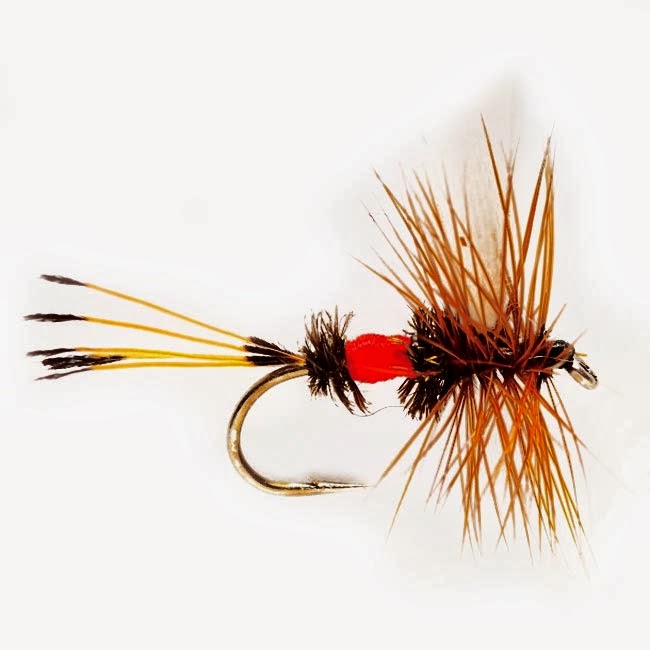 The Royal Coachman. One of the most commonly used flys out there - a trout fly modified from the Coachman model by adding the red floss to the belly - securing it against energetic New England brookies.

"First designed in 1878 by John Hailey and named by L. C. Orvis, the brother of Orvis founder Charles F. Orvis." - via Orvis.

Quote below for the excellent Northern Borders by Howard Frank Mosher - lately a movie from Vermont director Jay Craven. Trying to organize a screening of it - will keep you informed. In the book, the grandmother has just double-barreled a Snowy Owl [against Federal law... -ed.] that was stealing her chickens and the grandfather just dynamited, unsuccessfully, a log jam. Great stuff.


My grandfather, who never fished with anything but flies, and used only one fly, a number ten red-and-white Royal Coachman, made a short, precise cast up beside the island. "What I really ought to do, Austen, is raise this so-called pond another three, four feet and flood out the whole shebang, island and oxbow and all. Back this little puddle clear up to the Idaho woods above and float that Christly jam right on out of there."

My grandfather stripped in line and cast again, He made that distinctive rasping sound in his throat. That would show them," he said.

By "them," of course, he meant my grandmother.

Related - check this doc Kiss The Water about legend Megan Boyd, who tied salmon flies in Scotland - some of the most sought after in the world. Fun fact - she did not fish herself...

Kiss the Water - Trailer from Virgil Films on Vimeo.