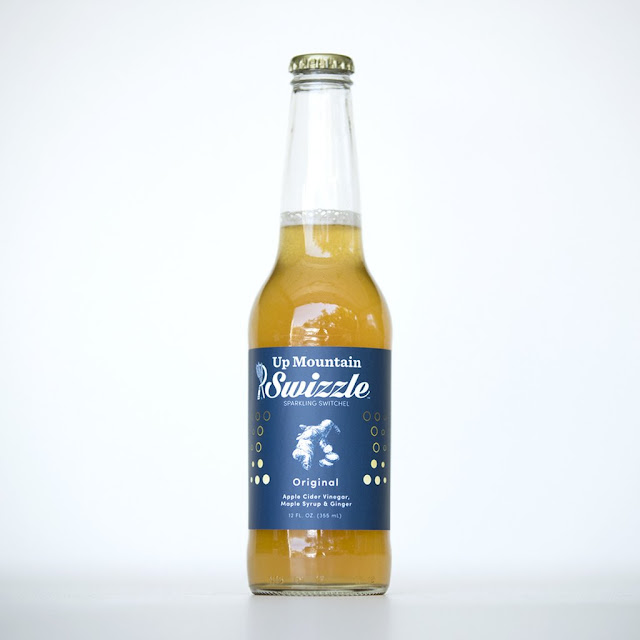 Recently re-connected with the resident Brand Archivist and Historian at Carhartt, Inc., Dave Moore, who is tasked with creating their physical archive from the materials at hand - as well as setting an agenda for collections and processes.  You can read my earlier interview of Moore here.


Many 10e readers share my fascination with this storied brand and its place in the workwear canon. I have noted before that Carhartt seemed a little late-to-the-party to formally organize an archive, so always interested to hear what is happening now and any academic principals that guided their decisions.

Ranch or 'western' wear made sense as an expansion of Carhartt's construction line and as customers were found south and west, the southwestern influence came back too. Here looking at the specific southwestern designs offered in the 1990s from Carhartt (sometimes called Aztec due to the geometrics reminiscence of South American art). These are pretty handily available on eBay (as noted below) - the rest of the images presented direct from the Carhartt archives.  Enjoy - and thanks again to Dave Moore again for the informative interview! 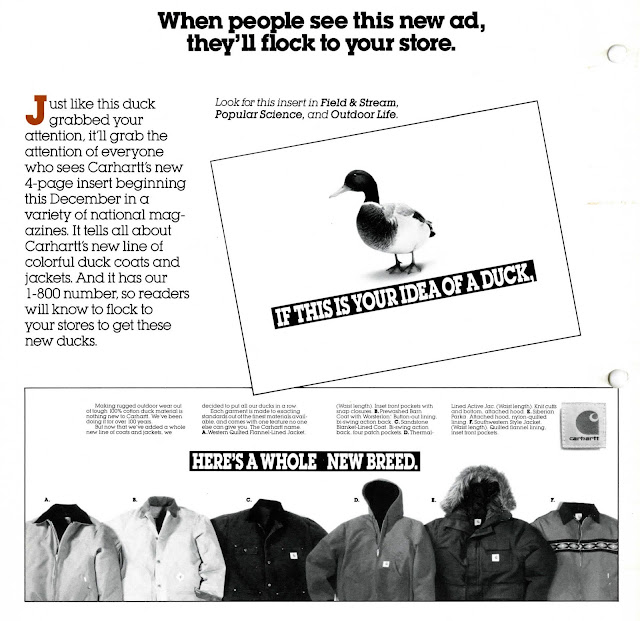 Dave Moore: The first Southwest Carhartt products were made in 1991 - a blue denim and black denim jacket, with Southwest pattern linings.

DM: I would say that the award for the loudest is a dead heat between the Aztec Jacket and the Printed Chamois Shirt. 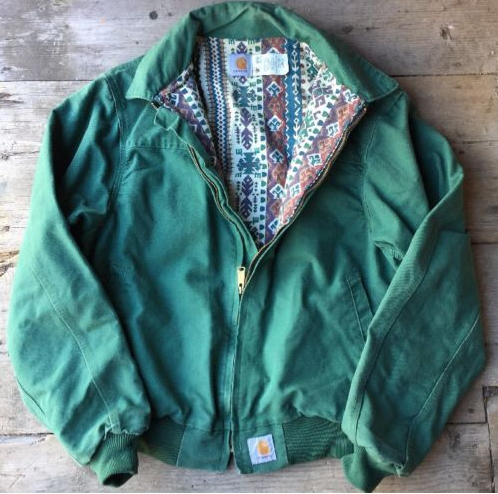 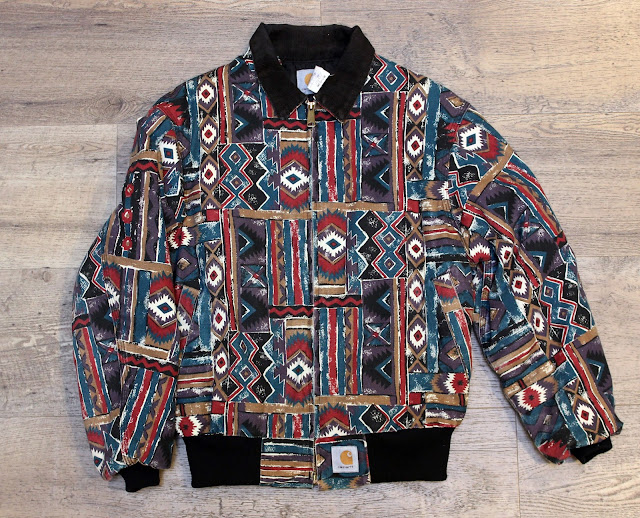 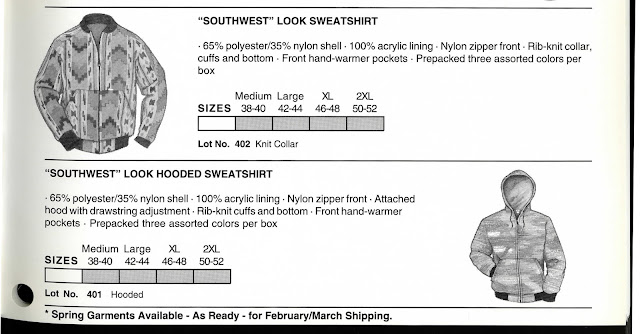 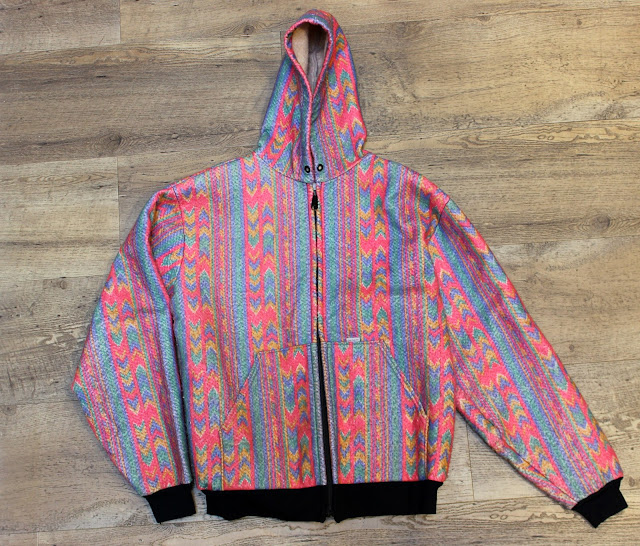 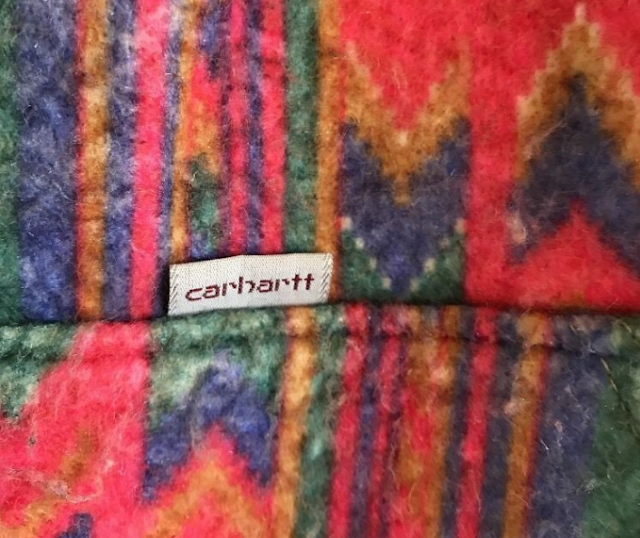 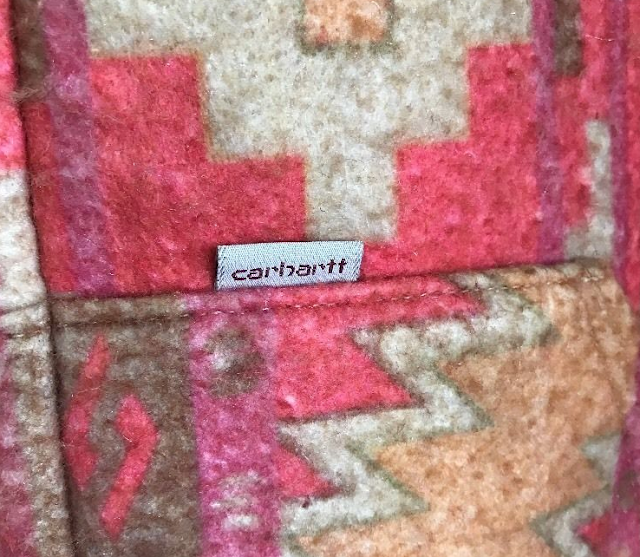 
10e: When did the range actually start?


DM: 1991, although these were Southwest linings only. 1992 was the first year that Southwest-style patterns began to appear on the exterior of the garments with the Southwest Look Sweatshirts (see above). The last year Southwest products were produced was 1995.


Aside from garments, we sold Blanket Southwest Look Caps in 1992 and 1993. They came in quite the variety - bills in different fabrics that were either unwashed, stone washed, or acid washed, and a ton of different patterns. When ordered by retailers, they came one dozen to a box with “assorted colors.” 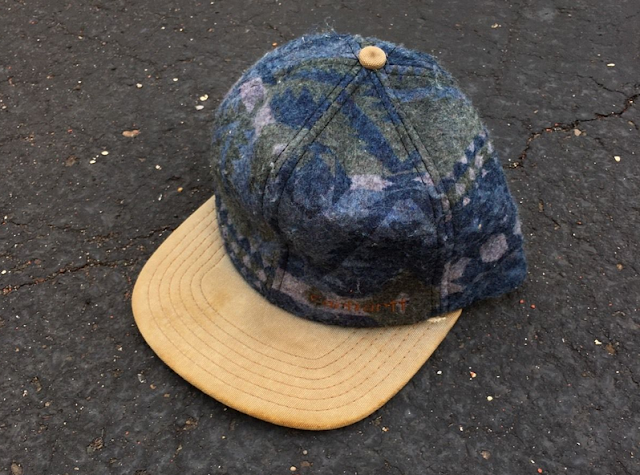 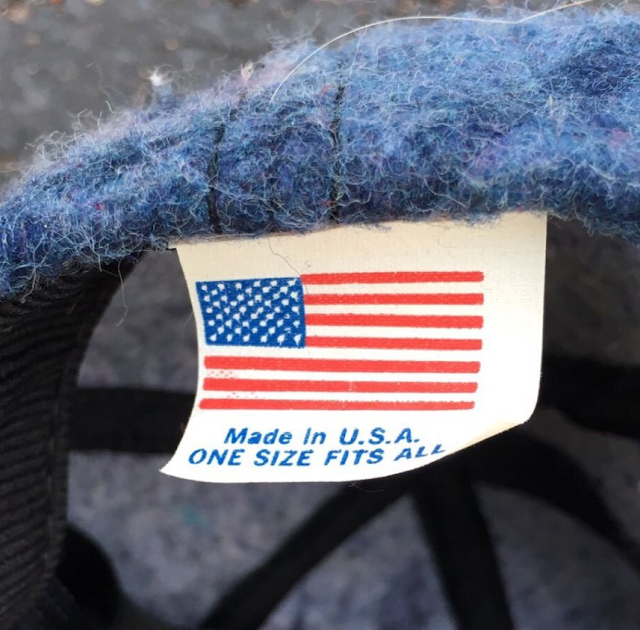 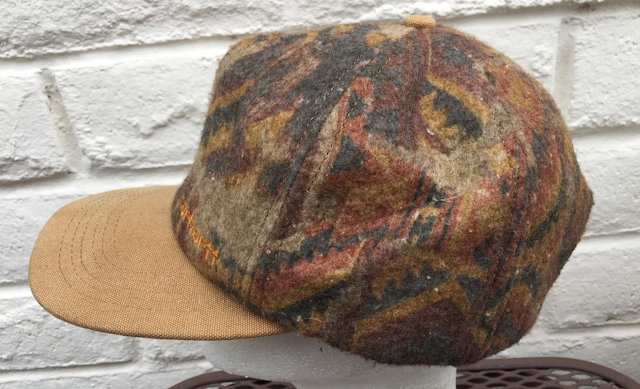 DM: We also offered versions of some of our most iconic products with Southwest linings, including the Chore Coat, which celebrates its 100th anniversary this year. This is a garment that has not seen a huge amount of experimentation in its blanket lining over the years, so the inclusion of the Southwest influence in the ‘90s is particularly of note.


10e: And these were an offshoot from western wear?


DM: 1992 was the first year that Carhartt made the garments that are most synonymous with our Southwest styling. Two of the products were, indeed, an evolution of Carhartt’s Ranch/Western Wear, which traces back to the 1960s. 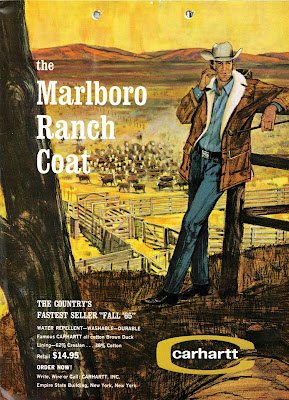 DM: The Southwestern Style Jackets were billed in their product descriptions as having “Traditional Western styling”. 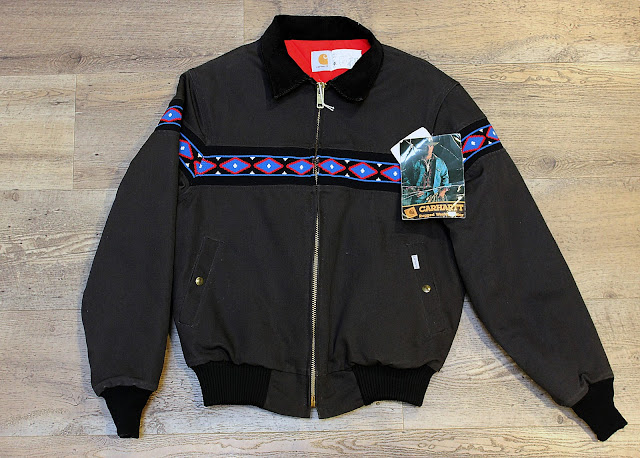 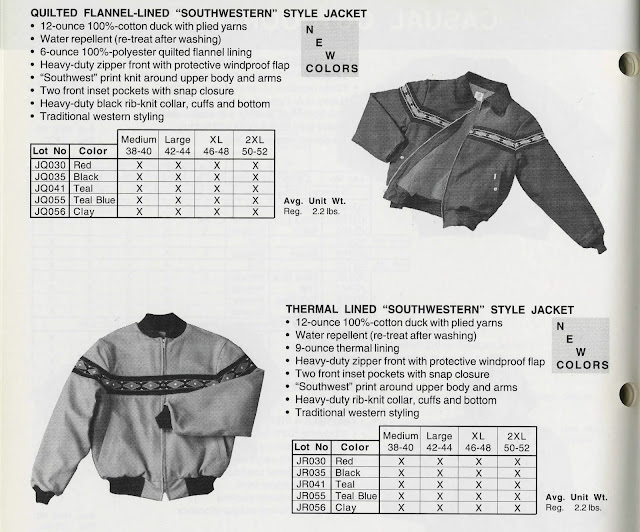 DM: Carhartt also produced a version of our classic Active Jac with Southwest styling. These garments were a bit more muted than 1994’s Aztec Jacket, as the Southwest pattern only appeared in a stripe across the chest. They were, however, produced in an array of colors that were right at home in the ‘90s, such as teal blue, carbon blue, cactus (a bright green), plum/damson, and redwood (a bright red). 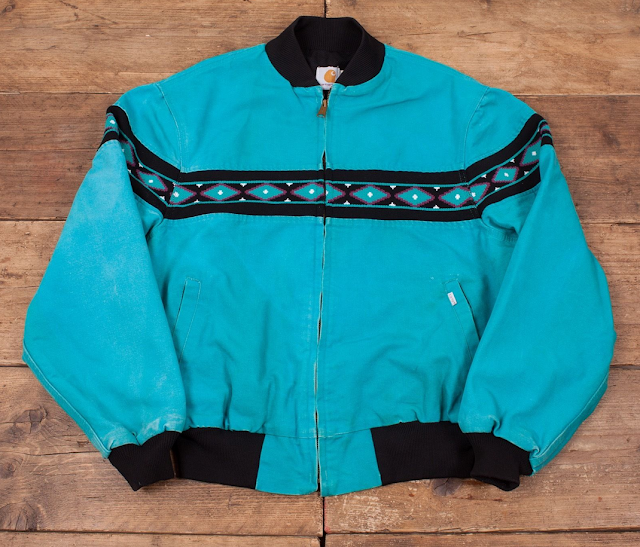 
DM: It consistently blows me away how many of these various products you can find on online auction and vintage sites, often in good condition, considering they were only made for about a five year period.

10E: Do you have any knowledge of the designers behind the choices? Sources of their inspiration?


DM: According to Mark Valade, Carhartt CEO/Chairman of the Board: “There were other western wear manufacturers at that time that produced these products, but our then sales manager – who was also our product developer – knew the jacket style could be a market for us as our western consumers already knew the brand… meaning we had credibility in the western wear market. Carhartt was a smaller company at the time, and we found new markets through trial and error. The webbing color and patterns came from US mills that specialized in western prints. [Current VP of Product Development] Deb Ferraro improved the jacket and updated the prints as she became our first professional product designer.”


DM: According to Deb Ferraro, Carhartt VP of Product Development: “The western items were in the line when I started. I updated the pattern that was on the chest of the duck jackets and I worked on the printed jacket and printed chamois shirt. The influence was the western market at the time. For the chamois shirting, I worked with Cone Mills to create the print design. I believe Avondale Mills printed the duck [DM: they have since gone out of business].” 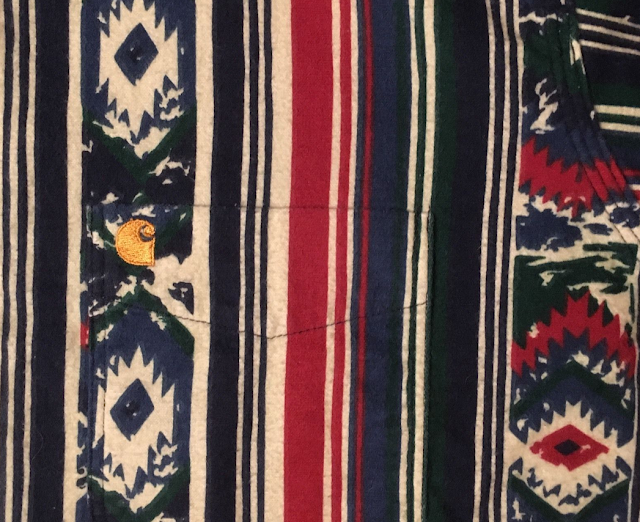 10E: Any scans or images of promo materials from this style. I have not seen much have to say.


DM: Very limited selection - by my records, it doesn’t appear to have ever been marketed as its own line, per se. These are scans from a pamphlet dubbed the “Carhartt Courier,” which was a communique sent to retailers of Carhartt products to inform them of new offerings, advertising campaigns, co-op materials, etc. 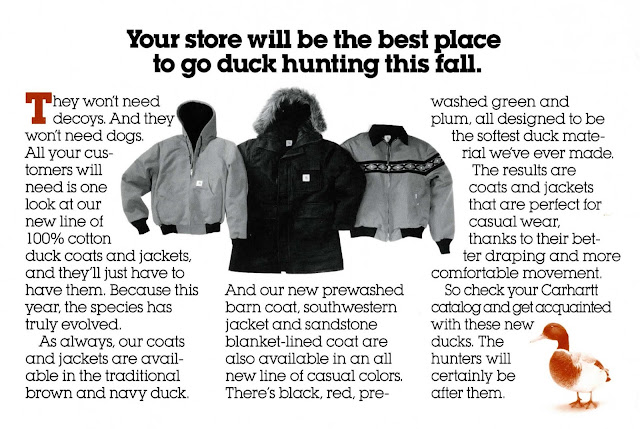 
1991    Southwest linings appear
1992    Southwest Look Sweatshirts and Caps released
1993    Traditional Western Wear products and Active Jac released in Southwest patterns
1994    The Aztec Jacket and the Printed Chamois Shirt, some of the most eclectic products ever in the line, appear
1995    The final year Carhartt’s Southwest products are produced


10E: Do you know if Carhartt plans to reproduce any of these historic products?


DM: We, of course, work pretty far out on product R&D, and I do work with the design department pretty regularly. Vintage patterns and styles are very much in the current mindset for product development. As far as reproduction of historic products in general, this year we’ll be releasing a 100th anniversary limited edition Chore Coat, which will include historic styling elements and a Faribault® lining.

Some great stuff - thank you again Dave Moore and Carhartt for dipping into the past. Cheers!