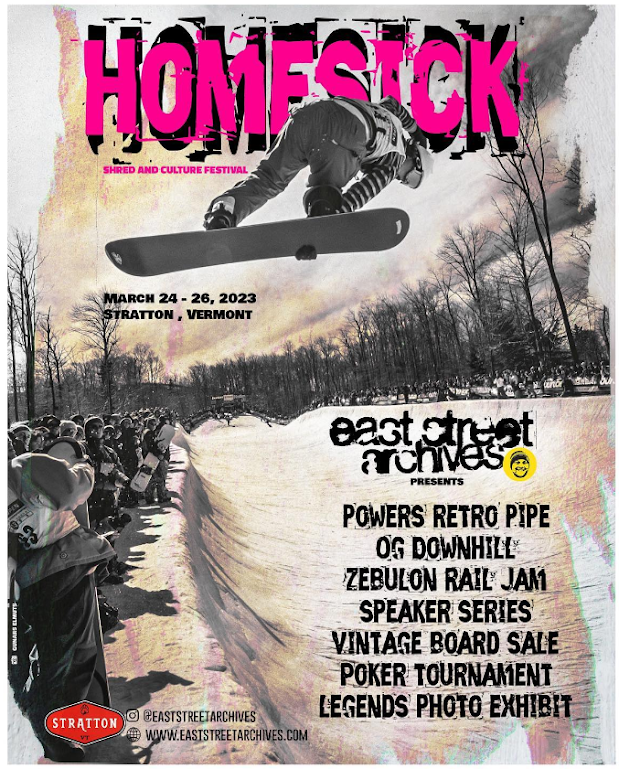 ARE YOU HOMESICK???
East Street Archives, in partnership with Stratton Mountain Resort, will be producing HOMESICK, March 24 - 26 2023.
Look forward to;
East Street Archives will continue to make supporting non-profits a key objective of all we do and create. During HOMESICK we will be raising funds for The Stratton Foundation, CHILL Foundation, and Level Field Fund.
Register for competition via EAST STREET ARCHIVES. Olympic medals and US Open trophies welcome but not required... Spectating is free.
For those just joining, East Street Archives is Gary Land, and his personal love letter to snowboarding.  It is also a 437-page book. East Street Archives delivers a raw look and emotional journey from Gary about East Coast snowboarding during the golden era of riding in the 1990's. There are many never-seen-before riding and lifestyle images, captured on 35mm film throughout the mountains and streets of the USA and Canada. The book celebrates the riders, personalities, and moments that were instrumental in pushing snowboarding through a historical decade.  Order here. 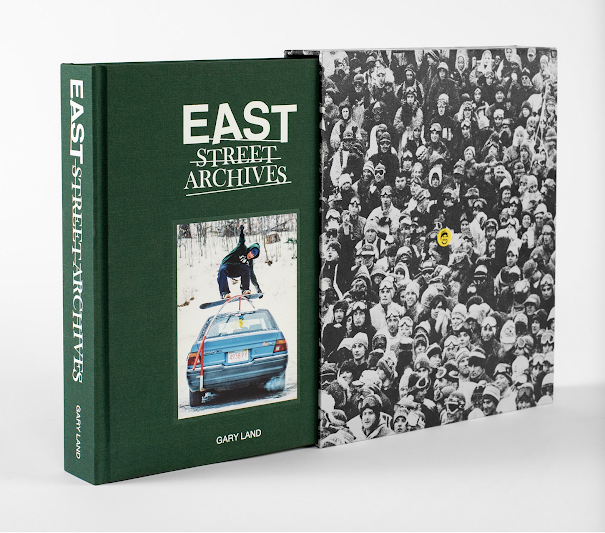 "In 1972, the children's album Free To Be... You And Me debuted, featuring stories and songs that celebrated tolerance, individuality and gender neutrality."  Listen to a recap by Deena Prichep on NPR 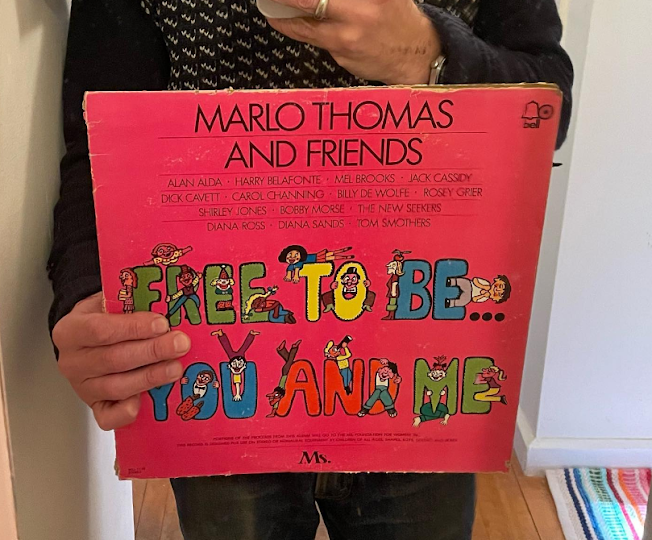 KH aka 4TET live extended version of Looking at your pager.  (link)

When Queen Elizabeth II passed away yesterday, October 8th 2022, the steps for succession and for government and media response were already designed and designated. Set to follow from a coded message "London Bridge is down" radio and tv broadcasts would know to pause... Fascinating 2017 article in The Gaurdian details it all (with a wrinkle yesterday as The Queen was at Balmoral).

In 2002, when the Queen Mother died, the obit lights didn’t come on because someone failed to push the button down properly. On the BBC, Peter Sissons, the veteran anchor, was criticised for wearing a maroon tie. Sissons was the victim of a BBC policy change, issued after the September 11 attacks, to moderate its coverage and reduce the number of “category one” royals eligible for the full obituary procedure...

But there will be no extemporising with the Queen. The newsreaders will wear black suits and black ties. Category one was made for her. Programmes will stop. Networks will merge. BBC 1, 2 and 4 will be interrupted ... before coming together for the news. Listeners to Radio 4 and Radio 5 live will hear a specific formulation of words, “This is the BBC from London,”

Short and instructive article on PutThisOn about how to dress for a funeral or remembrance service which comes down to this;

Your goal in dressing for a funeral should be to reflect the significance and gravity of the occasion. Traditionally, this means dark suit, dark tie, white shirt, black shoes.

People don’t generally die on our schedule. For this reason, it’s important to have something on hand appropriate to wear on short notice.

On that final note... do you have a black tie? If you have read this far then probably time... 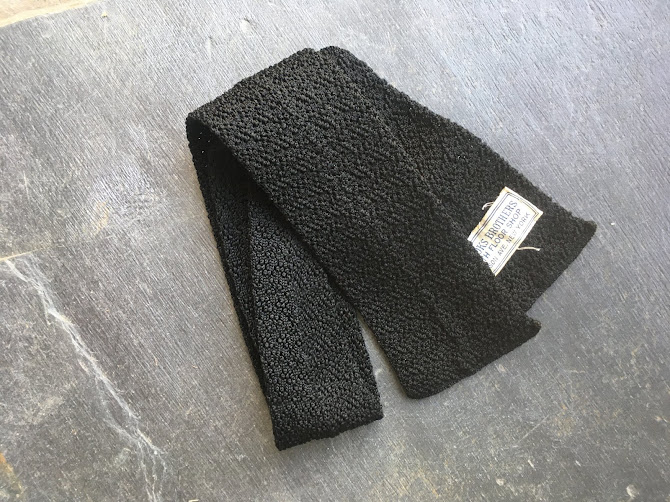 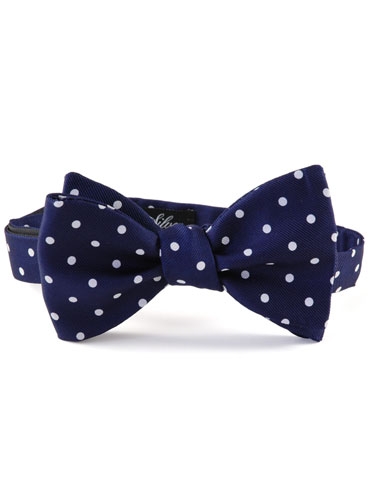 Polka Dot Bow from Ben Silver in the style of those Winston Churchill would have worn...
Churchill wore a pattern on the non-bias though I think... like those from Turbnbull&Asser 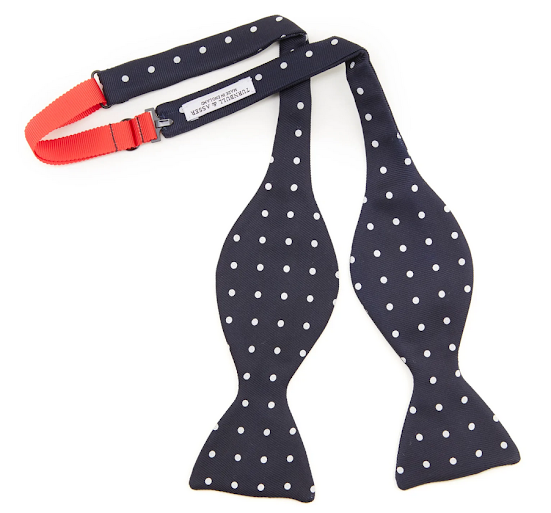 Sort of prefer the off-angle.  One for the parents... "my life makes your life possible.."
﻿

Cooks Illustrated magazine had a tiny bit recently on why it can be effective to add some water to your neat whisky - or whiskey.  Link to article.

"...the flavor in whiskey is in the form of ethanol-soluble molecules. The higher the proof of the whiskey, the more flavor molecules dissolved in the alcohol portion. Cutting the spirit causes some of those flavor molecules to come out of solution, so they are more readily smellable and tasteable" 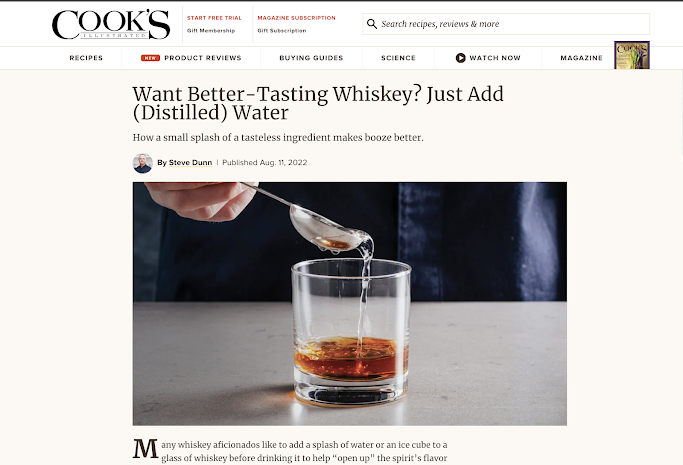 BUT - the physical magazine (Sept/Oct 2022) better described the chemistry at play and know you will appreciate this...

"alcohol-soluble flavor molecules tend to avoid the whiskey's surface when it's more than 50 percent alcohol....  Cutting the spirit with water lowers its proof and brings these molecules to the liquid's surface, amplifying the drink's flavor and aroma when sipped."

This knowledge almost as essential as knowing what shaking does to a martini... further reading.

A sweet treat from Scotland almost at "Irn Bru" level of fame and sweetness... Tunnocks Teacakes.  Fortunately available all over the UK.   Only recently realized they are essentially what Americans call s'mores!   So good... 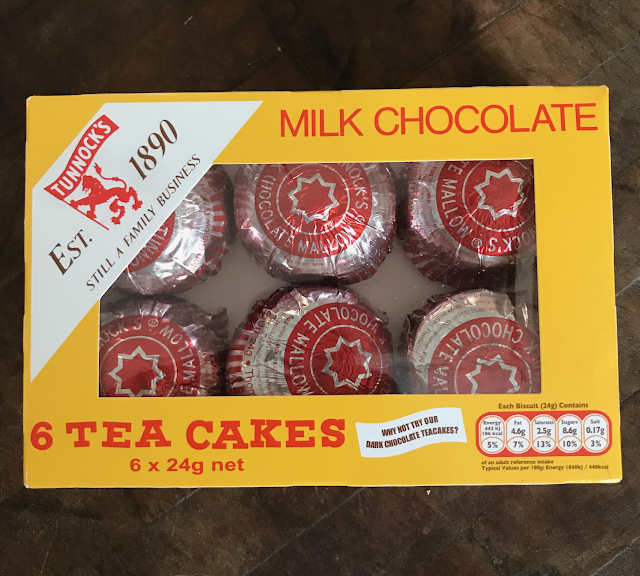 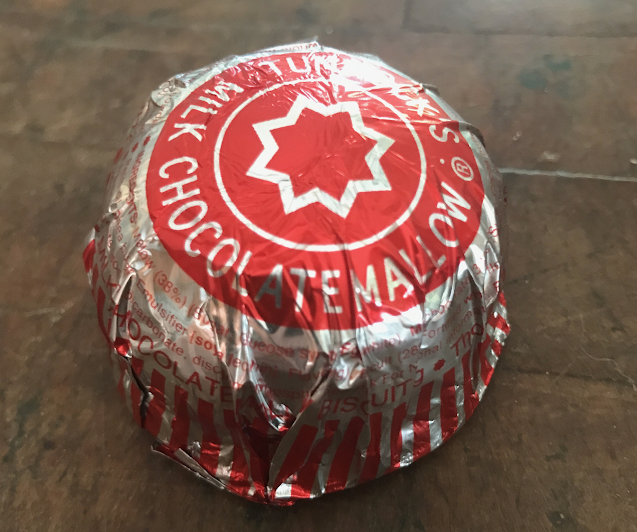 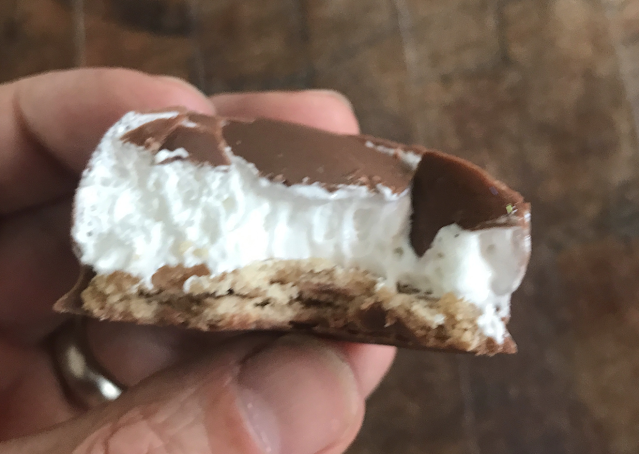 The foil wrapper is iconic.  But do you crush it or smooth it flat after eating...  are you obsessive??  Watch the STILL GAME clip and decide... 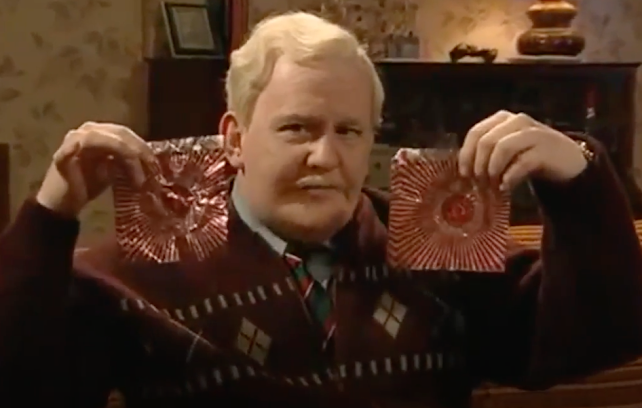 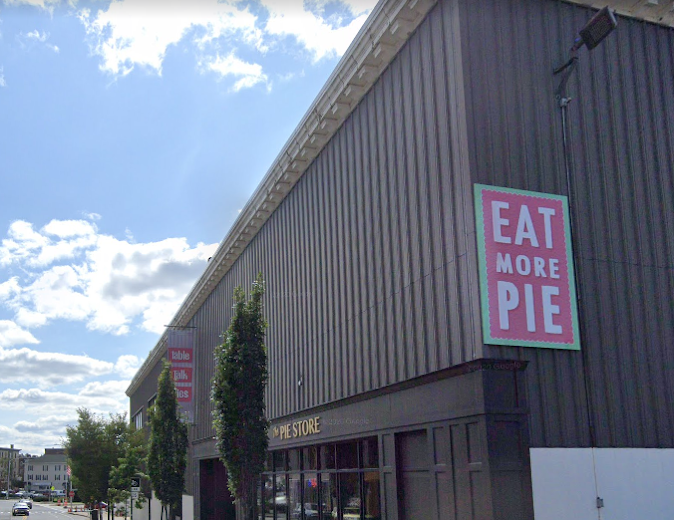 Table Talk pies have been a popular treat for generations of Americans, and especially those who live within a 500-mile radius of the Worcester, MA plant where the company has been baking pie since 1924. At its peak, Table Talk was buying four million pounds of Maine blueberries for its blueberry pies, the second most popular flavor after apple. -via Business Review 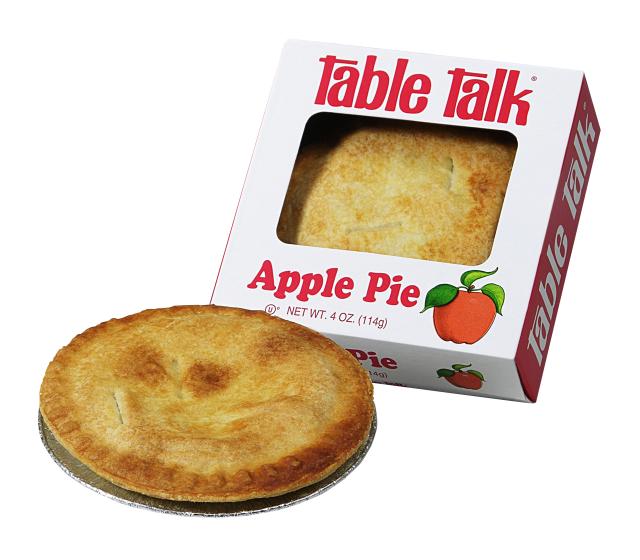 Retro-tastic logo... gets me every time. For less than the price of a DDonut grab one to chomp on.  They are palm sized so perfect for finishing between the grocery store register and the car park... Went on a field trip to Worcester, MA yday and at 3 for $1 you better swing by the Table Talk factory store (The Pie Store, 153 Green Street) Guilty pleasure?  Maybe. 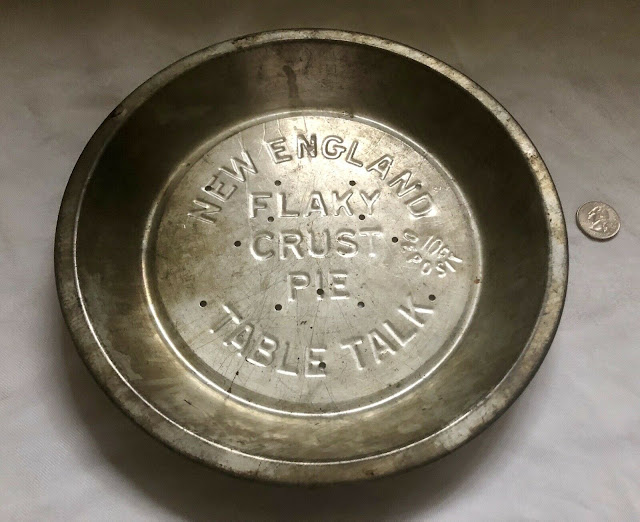 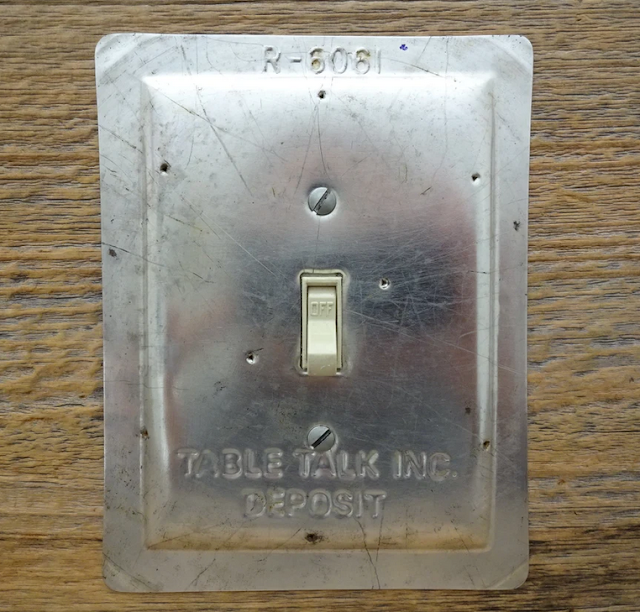 Until at least the 1950's the pies came on a tin that was redeemable for 10c. What - is that equivalent to about $5 now!... Not sure how that worked out economically. Dig the use of the old tin for home projects like the lightswitch above. In the 80's the owning family sold the business to Beech-Nut, who almost ran it into the ground due to over expansion. The grandson of the former owners has since bought back the farm so to speak. Fantastic. 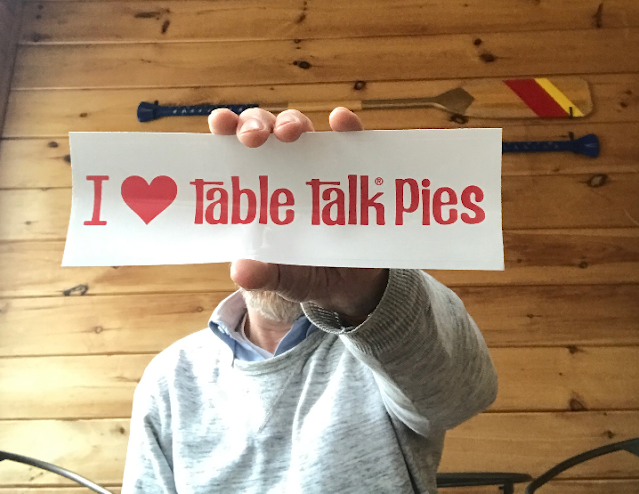 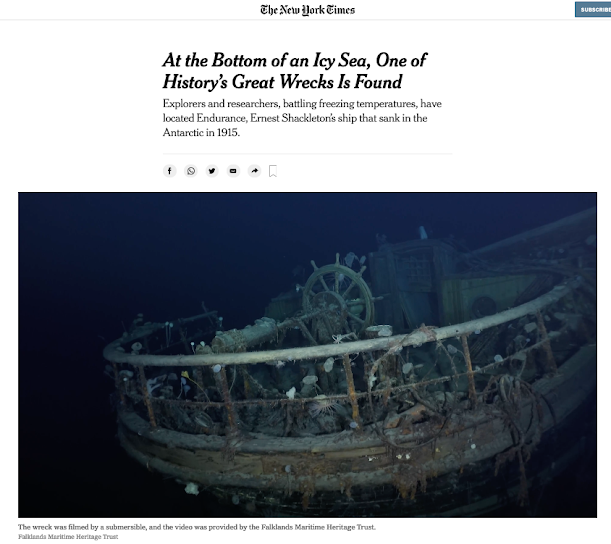 At the Bottom of an Icy Sea, One of History’s Great Wrecks Is Found
Explorers and researchers, battling freezing temperatures, have located Endurance,
Ernest Shackleton’s ship that sank in the Antarctic in 1915.

Read via the NYT.  Get out the rollneck sweaters!

Found using submersibles [assumed that -ed.] from aboard the Agulhas II.  File under 'for the man who has everything..."   Image and more info at Shipbucket.

Thee are almost as cool [stop it -ed] as a Magne Viking...

Further reading: 10E2658: Magne Viking | No Well Dressed Man Should Be Without One