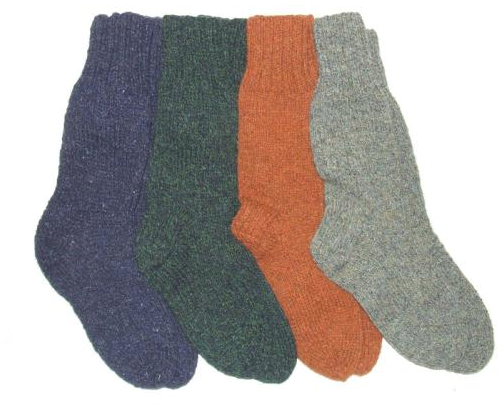 "For many centuries wild and hardy sheep have roamed the Hebridean Islands [to the north-west of Scotland - ed.], their heavy wool protecting them from the elements. This wool was harvested by the islanders every summer then hand knitted into heavy sweaters and socks or woven into the cloth that became known as "Harris Tweed".

Some of this locally produced wool would have been dyed using vegetable dyes and some used in its natural uncoloured state. Following dyeing, the wool was mixed, oiled, teased and carded prior to being drawn out for spinning carried out on familiar spinning-wheels by the local crofter's wives and daughters. Today these mothers, daughters and grannies are still hand knitting traditional Hebridean Knitwear, such as these amazing socks."

Harris Tweed underwear. THAT would be a joke...