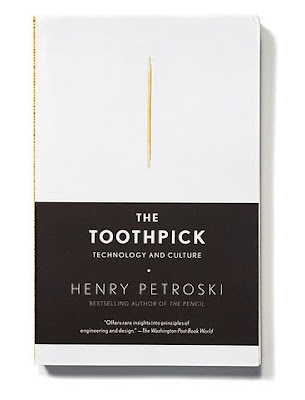 I like these historical narratives that are created using objects, e.g. the books Salt, and Cod. The Toothpick by Henry Petroski does something similar but happens to also intersect with the Maine logging industry and the story of American manufacturing generally. Plus, I bet you know someone who mysteriously started using toothpicks after seeing the movie Drive... this book is for them too.

The Maine Historical Society is holding a series of discussions in the upcoming months, "Extraordinary Histories of Ordinary Things" with The Toothpick as one focus. More info here. Sidenote, the book is also a testament to the power of research (and not using Google), as the author finds many mistruths online and has to dig for hard data with interviews and visits to various repositories. I'm a bit late to the party here as book out a few years ago but looking forward to this. Excerpt below;

The plain wooden toothpick, it may be argued, is among the simplest of manufactured things. It consists of a single part, made of a single material, intended for a single purpose–from which it gets its simple name. It is also among the most convenient and ready of things. It can be used directly out of the box–there being no instructions to read, no parts to assemble, no priming or booting required, and no maintenance expected. When it has served its purpose, it is simply discarded.
.
.
.
The very simplicity and banality of the thing made the toothpick and its manufacture an artifact of tacit knowledge and trade secrets. Even in the late twentieth century, Japanese visitors who showed up at a Maine toothpick factory were turned away, lest they see the tricks of the trade. An American scholar, who should hardly have been seen as a potential competitor, was similarly denied entrance to a Minnesota counterpart. He had to go to Sweden to see some toothpicks being made.

Secrecy coupled with a dearth of reliable, confirmable documentary material makes the task of uncovering the real story of a common object a challenge for ordinary scholarship relying on the usual scholarly sources. But there are other sources of information, not least of which is the artifact itself and the documented social and cultural context in which it has been made and used. Much of the story of the toothpick must be coaxed out of the thing itself and its milieu. With patience, slivers of it can be teased out of even a closed box of toothpicks the way a stubborn seed eventually can be dislodged from between the teeth. Insights into the use and misuse of things can be gleaned from both the froth and the detritus of society.
.
.
.
To an engineer, the challenge of mass-producing something like a toothpick with sufficient efficiency that it can be sold at a profit holds a special fascination. The origins and rise of the mechanized toothpick industry in the latter half of the nineteenth century make for a fascinating chapter in the history of manufacturing, as do the human stories of inventors and innovators such as Benjamin Franklin Sturtevant and Charles Forster, along with their inventions, their patents and patent rights, and their struggles through failures on their way to achieving successes. It is in this chapter of the story that the history of the modest toothpick assumes heroic proportions and provides especially poignant lessons for the technological enterprises of today and tomorrow.