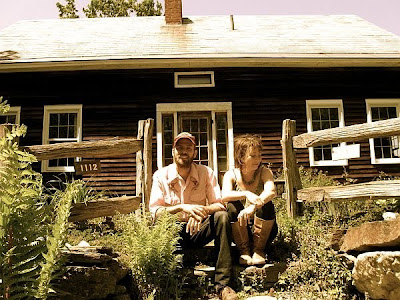 Tyler Gibbons and Robin MacArthur above form the band Red Heart The Ticker. Admit, I don't love every single thing they've done but you cannot deny their provenance; Robin's grandma Margaret was a famed oral historian and folklorist who recorded traditional and folk ballads around Vermont and performed them as well. She was called a "living art treasure of New England" at one time.

This idea of keeping saved works vital definitely gels with current archival thinking. RHTT have brought out an album of these songs; try Locks And Bolts below and preview the rest here.
Locks and Bolts by Red Heart the Ticker

The late Margaret MacArthur of Marlboro [VT -ed.] made a life's work out of collecting and reinterpreting songs that Vermonters sang.

She saw old songs not as museum pieces but as things kept alive by constant use - made to be picked up, reshaped and performed.

That's why collecting songs was only part of MacArthur's life's work: Performing them in recordings and in front of audiences was equally important.

(Robin MacArthur) "We actually got a Vermont Arts Council grant to record this record, and what we said is if songs are going to survive, part of the folk music process is to change and evolve and fit the times, so that they can reach new audiences."

For the album, she spent time going through the original field recordings her grandmother made, which are kept in the archives at the Folklife Center.

(RM) "Most of it was unaccompanied by instruments and the singing was very different from the way she sings them, and she added dulcimer and harp and guitar and had family members sing along, so she changed them in her own way, so we've just taken that another step into the future."

(RM) "A lot of them are written by women and from the perspective of women, so its kind of this oral-literary legacy from this place that otherwise is forgotten. Singing these songs myself has really changed the way that I feel and relate to the landscape around me."
-via VPR