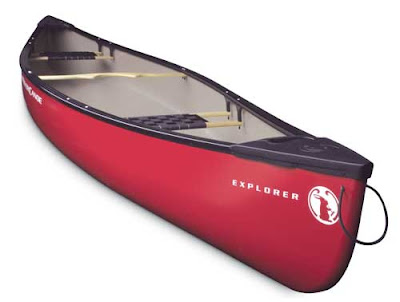 Would say eventually to this, but Pops managed to pick up a Mad River Canoe secondhand last year (Legend model in green, pics above from the internets)... so will try to get out on it this summer.

"Mad River Canoe had admittedly humble beginnings. Frustrated in his search for a canoe suited for wilderness paddling, Jim Henry in 1971 finally gave up and decided to go one better and build his own, the original Malecite. Virtually on a whim, Jim entered the 1971 National Whitewater Canoe Championships on the nearby Dead River in Maine. Jim went on to win the Down River competition and immediately encountered demand for his boat. Jim set up shop in a shed on his property in Waitsfield, Vermont and started building canoes, taking the company name from the Mad River, which flowed through the valley below his hillside home.

Within a year demand outstripped the production capacity of Jim’s woodshed and Mad River briefly partnered with Tubbs of Vermont before bringing production home to Waitsfield. In 1973 Jim and wife Kay incorporated the Mad River Canoe Company and occupied a production facility in town.

In 1998 Mad River partnered with Wilderness Systems of North Carolina to form Confluence Watersports (joined shortly thereafter by Wave Sport kayaks). At the end of 2001, Mad River moved production facilities to Trinity, North Carolina where the long-established tradition of innovation continued as witnessed by the advent of the IQ and IQ2 modular gunwale systems.

2005 brought a new chapter in the history of Mad River as Confluence Watersports (our parent company) acquired Dagger and Perception and we consolidated operations in Easley, South Carolina. Our expanded family has allowed the synthesis of the best of Mad River and of Dagger Canoe, a worthy former competitor, into a greater whole."