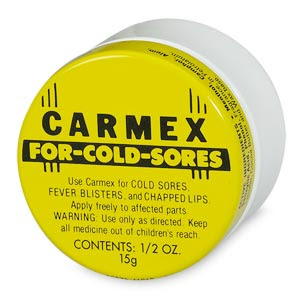 "Alfred Woelbing was a buyer at a Chicago department store back in 1937, but he didn’t much like working in the big city. So he began his own business, making silver polish in the basement of his home in Wauwatosa, Wisconsin. It paid the bills, for the time being.

Alfred then decided to create a home remedy for a pesky condition that he’d often suffered: cold sores. After much experimentation over a hot plate, Alfred created Carmex, and then proceeded to sell it to pharmacies by going door to door. If they weren’t interested in purchasing his product, he gave them a dozen jars for free—along with a post card for a re-order. He figured that if he could sell one jar at every drug store in Milwaukee and Chicago, he and his wife could make a decent living.

It wasn’t long before Alfred’s home-based business was booming. Apart from a wartime hiatus in production due to lanolin rationing, Alfred’s company—now known as Carma Labs—grew steadily. For 35 years, Alfred made sales calls in Wisconsin, Illinois and parts of Indiana. He remained president of the company until his death in May, 2001...

Alfred died at age 100. Up until the age of 96, Alfred worked 8-hours a day, driving over 40 miles to get to work. Even after he stopped his daily routine, his presence was still felt. His son and grandsons continue the Carmex lip balm tradition today."
-paraphrased from MyCarmex.

Iconic original jar imho, though no shock that the original cold sore purpose slightly downplayed in the jar's later iteration as below. Slight irony alert that a product to treat cold sores can help spread them if you use an infected person's jar... I guess "don't share" is the answer at all times. Anyone else keep a jar in the glovey that either melts in summer or is rock hard in winter? I should probably rethink that habit.

The tubes (introduced in 1988) might be easier to work with in winter but something about the milky glass of the jars is so great. The smell is pleasant and the mouth feel is tingly due to camphor and menthol. Further ingredients.