tarzan of the apes 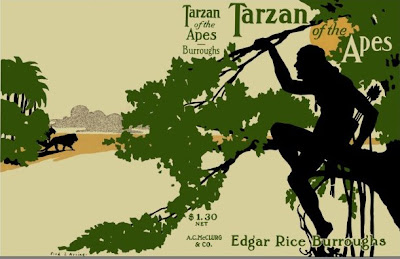 Just finished the adventure classic Tarzan of the Apes, the first of more than two dozen in the Tarzan series by Edgar Rice Burroughs. Highly recommend. It is not a goof or a romp as many early, slightly campy film versions make out. Gorey. Bows and arrows play a large role in the story which was news to me, and the preamble of the Claytons arrival on the island (Tarzan's parents) is a great castaway-type segment. You can see the where the films (and later tv series) traced their jungle roar/yodel but in the book it is instead a throat-rending explosion into the sky, let out after each bloody kill. Again, good pulpy stuff.

Note, there are serious 1914 Euro-centric views expressed about other nations and the noble white man's inherent superiority... a caricature of the black nanny, and it has been noted that by the 1969 (5th printing) further material had already been left out that was deemed "offensive to certain groups or nationalities". Still, think it is worth reading to see the foundation of this recognizable character.

You can read it free via the GutenbergProject or on your Kindle/iPhone app, again for free, via Amazon. Serious pageturner. Perfect commuter fare.