what i have been doing on the weekends 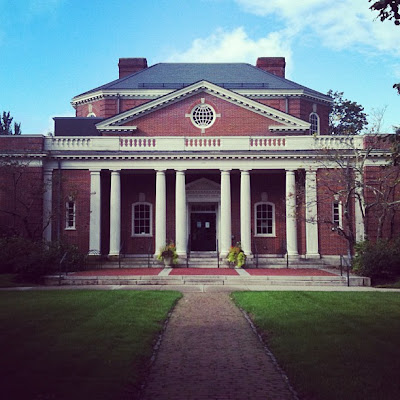 I recently had the opportunity to complete an 8 week internship in the William Munroe Special Collections that is housed downstairs in the Concord Free Public Library (above) in Concord, MA. Open to the public btw, but if you have an idea of what you are looking for I recommend you communicate in advance with the energetic and straight-talking curator Leslie Wilson. Quick note to the uninitiated; Concord and its residents were closely involved with pre- and post-American Revolutionary history (18thC), and was also a seat for the Transcendentalist movement of the 19thC (Thoreau, Emerson et al.), and much more. It is chockablock with history. Has history coming out of its ears...

The Special Collections also house related materials on the back to land movement of the 1960s as popularized by Scott and Helen Nearing, New England vernacular architecture, tools, and New England colloquial pastimes and music. #wheelhouse. These other materials made the reading room a place to delve into a wealth of Americana and frankly was a joy to visit.

The collection with which I worked was not for Thoreau-fanboys, but rather was photographs created by the Department of Public Works of Concord recording weather events, road construction, snow removal and the building of several reservoirs. That makes it sound perhaps a little dry, but there was a lot of social/historical data available from the photos about the men at work, the change in municipal plant, plus the weather event photos of a 1921 flood and a certain hurricane in 1938 were fantastic.

We did not scan the photos at this time, but produced a detailed online finding aid. The technician there happened to also be a streetscape buff, and provided this extra bit of info to the central image used above;

"The pic of the street light and wires is equally interesting as that particular light is 1910-ish (The second generation of incandescent lighting -- this is when they ran high voltage (ca 1,200 volts) to street lights, and the street light bulbs 12 volts, 200 watts each -- they had shunting devices in them so if the light went out the series circuit would remain lit).

One of the biggest complaints of this set-up was when if it rained hard, the voltage was so high that the wires at the fixtures would arc and light-up the area with a blinding blue/white light). The telephone poles not only show tons of party line telephone lines, but telegraph as well."