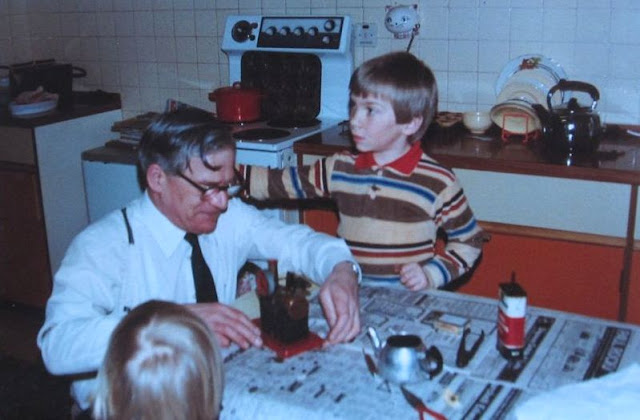 My English grandfather was a bit of an enigma to me have to say... A true company man in the 60's mold (double-tanked British racing green JaguarXJ6 included -fantastic) who was first a salesman (white gloves/ketchup popsicle type) then hard nosed union busting manager, and definitely not PC. Easy to make him laugh though, that felt good... First read Jaws and Dr. No from his bookshelf. His barber was the first to buzz the back of my neck as a short/back/sides; running your hand over that was a milestone.

Love the picture above as it showed him in entertain the children mode which consisted of getting out a Mamod engine (which ran on methylated spirits, the toy actually produced in nearby Birmingham) whose flywheel could be hooked up to various attachments like a polishing wheel. Other activities with gramps were; watch Tom&Jerry, mow the lawn, or eat unconstituted jelly cubes.

I could only find 1 photo of him NOT wearing a tie; and in later years a tie, shirt, v-neck sweater and tweed jacket were the uniform. Gramps rocked the brylcreem/braces/armband combo for as long as I remember; you can just peek the nickel armbands in the picture. Actually coming around on these; allows one to get dressed properly but then zoom your sleeves up a bit if you need to tackle say, a greasy oilcan for your grandchildren...

In the evening we could pour him a glass of sherry or he would make a G&T, soon to be followed by the mock-bellowing of someone has finished my drink! meaning can someone please refill my glass. Good stuff. He mellowed alot as the years went by and got to meet both of his grandchildren. Passed away a year ago, at Pops' house, about as perfectly as you could ask for.

The below photo was also at his West Midlands house about 25 years after the above, just next door to that yellow kitchen. Vermont map over my shoulder and granny's thimble collection on the wall. Grandpa probably wearing that same black tie... 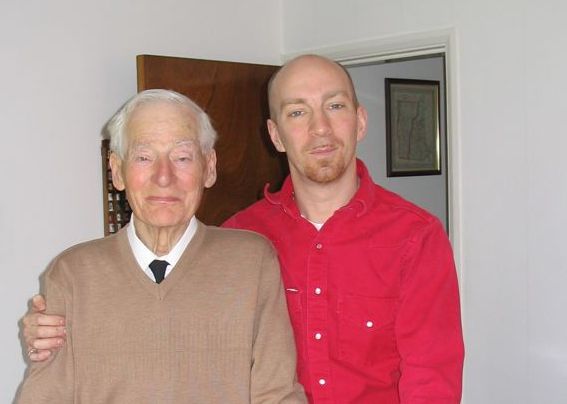