I am heading out to get this as soon as I click POST. Tom Waits guest edited the 200th issue (July 2010) of MOJO magazine. 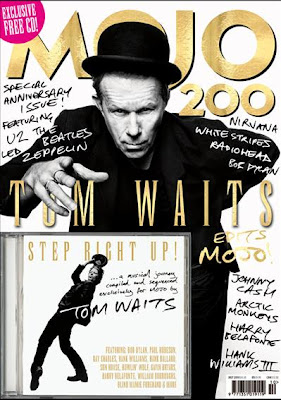 HARRY BELAFONTE: In this month’s MOJO Interview, one of Waits’ lifelong heroes talks marching with Dr King, being taught by Leadbelly and giving Bob Dylan his first break. “His contribution to the world of music has been like a great river,” says your guest editor. Superstar producer Joe Henry is granted a rare audience with Harry Belafonte.

HANK WILLIAMS III: Relive this exclusive encounter between Tom Waits and the legendary, guitar-slinging outlaw of country music’s first family. Up for discussion: reconciling musical personalities, how to create “a death metal hillbilly invasion”, meeting Minnie Pearl, haunted houses and why Hank Senior must be reinstated as a member of The Grand Ole Opry.

MORE WAITS! His favourite one-hit wonders! His ultimate Buried Treasures! MOJO’s guide to all his albums!