boyd tonkin in london -not one more library must close 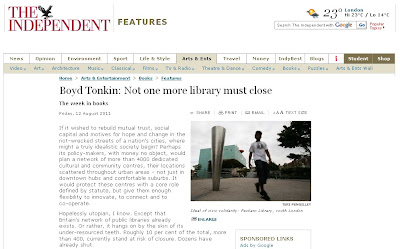 Some good stuff in this article over at The Independent. Love me some gallows humour too.


If it wished to rebuild mutual trust, social capital and motives for hope and change in the riot-wrecked streets of a nation's cities, where might a truly idealistic society begin? Perhaps its policy-makers, with money no object, would plan a network of more than 4000 dedicated cultural and community centres, their locations scattered throughout urban areas – not just in downtown hubs and comfortable suburbs... Hopelessly utopian, I know. Except that Britain's network of public libraries already exists. Or rather, it hangs on by the skin of its under-resourced teeth...

Prevention always costs less than cure. The prospect of friendly, busy branch libraries diverting even a few of the disaffected or the dispossessed from crime and despair sounds like sheer fantasy. But every little helps, as the slogan on the looted supermarket has it.