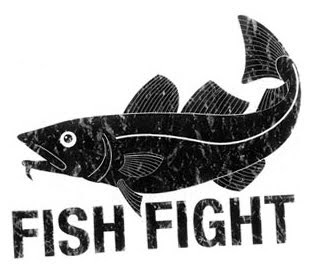 Fish Fight is a new campaign hub that will accompany British chef Hugh Fearnley-Whittingstall's series Hugh’s Fish Fight that will examine aspects of the fishing/food industry. The first topic is discarding, also called bycatch. At issue; potentialy half of all fish caught in the North Sea are thrown back overboard dead.


Discarding is not limited to the North Sea, it’s a massive problem throughout EU waters. Some of these discards are undersized fish, and some of them are species for which there is currently little market. But much of it is “over-quota” fish: prime cod, haddock, coley, whiting, plaice, and other major food species, for which the fishermen have run out of quota.

But in the pursuit of other fish for which they do still have quota, they cannot avoid catching large numbers of the “wrong” species. It’s an inherent problem in what is known as a “mixed fishery”.

The fish are being thrown away because to land them would be illegal. Only a tiny proportion of these fish will survive. For obvious reasons, fishermen hate discards. Conservationists hate them too.

Even politicians don’t like them. But they are an unavoidable consequence of the current Common Fisheries Policy [CFP -ed.]and the quota system. The very same rules that have been devised with the aim of protecting stocks (principally quotas and minimum landing sizes) have become the reason that so much fish is being thrown back into the sea.

The CFP is under review and due to be reformed in the coming months.

Further reading in this article from today's Independent. Clip below doesn't blow you away but I hope this series is good, seeems like Hugh has some eyes on him right now.