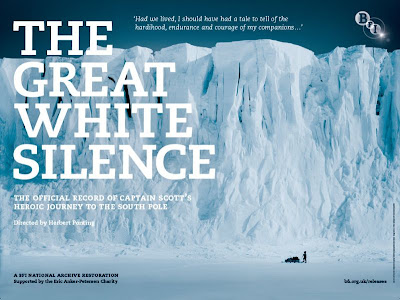 The official British Film Institute (BFI) blurb tells it all;

One of the major highlights of the 2010 London Film Festival is this gorgeous restoration of the official record of Captain Scott's legendary expedition to the South Pole.

In 1924, photographer/cinematographer Herbert Ponting edited his footage into this remarkable feature, which the BFI National Archive has returned to its former glory, using the latest photochemical and digital techniques to restore Ponting's complex colour tinting and toning.

via Caught By The River's newsletter.