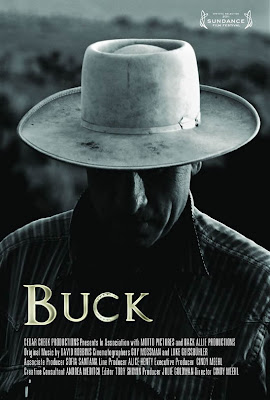 This film, BUCK, was created to move people to make changes in how they deal with horses and life's challenges. Buck Brannaman is a true cowboy who has overcome tremendous personal odds. This film intends to inspire, motivate and teach through principles of respect, partnership and trust rather than anger, fear and intimidation.
-via BuckTheFilm

You can see this at the Boston Independent Film Festival Boston this Sunday (at the Somerville Theater). This man, Buck, was the true life inspiration for the novel The Horse Whisperer.

Have said it before on 10e, I became allergic to horses at age 15 after having been an enthusiatic rider as a young boy, so sort of lost contact with that world, though Pops had horses for years including Pete, a drafthorse that we took over from the local postman. Pete was tough to shoe, and the old farrier sweated and swore and battled with Pete everytime -I was on halter holding patrol and would wheeze though the battles too. Look forward to this film.