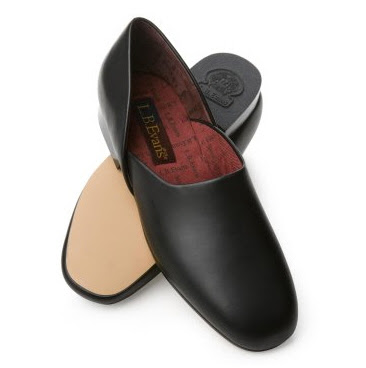 Potted history of shoemakers L.B. Evans paraphrased from their site;

In 1804, Thomas and Amos Evans ran a shoe business attached to their general store in South Reading, VT. There was no factory, just a small shop where Thomas and Amos cut leather parts for their shoes.

While Thomas and Amos supplied all the uppers, soles, counters, and heels, the shoe making process was farmed out among local citizens. Shoemaker-farmers assembled the shoes, sewing by hand whenever spare time could be found.

The shoemaker-farmers traded at the Evans’ general store, and according to the records, it seems most transactions were handled via barter of goods for services rendered and vice versa. In fact, a cash payment to each shoemaker happened only every six months. The Evans’ store customers also settled their accounts every six months and little cash was involved here as well.

Fast forward two centuries, now L.B. Evans is operated as a division of Daniel Green Enterprises, which itself has a fenceposty backstory...

Long/short had been admiring some of Pops' Peal&Co. slippers made for Brooks Bros., and I swear they were still available at Brooks till recently, but I look now and that exact item is gone. The L.B. Evans Radio Tyme slipper above will have to sub in... Sidenote: check these guady/great Peal&Co. Christmas party specials.