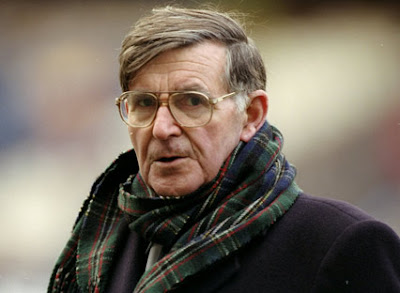 BBC Sport eulogizes Bill McLaren who died on Tuesday. The voice of rugby. He was the soundtrack to my winter weekends, like John Madden for the US folk. Hell, I quoted him at my brother's wedding... Further reading at 10e.


The great secret of McLaren was not that he knew who everybody was and what they were about on a rugby field. Nor was it his tricks of speech and his neat turns of phrase, agreeable as they often were. The point of McLaren was that he was absolutely potty about rugby: and this mad love was something he loved to share. -via The Times.

The standards of behaviour and sportsmanship that he expected from a game that can occasionally tread on the wild side, are the standards to which we should all aspire. A perfectionist by nature, his match cards, containing every conceivable fact and figure on players, officials and even the groundsmen, were minor works of art and are sold for huge sums in charity auctions. Getting things absolutely right really mattered to McLaren. On match day he could not contemplate eating because of nerves. Yet come kick-off he appeared so relaxed and anecdotal he could have been standing on the touchline, sharing a dram with you. -via The Telegraph.