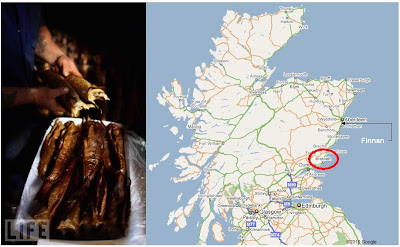 Since 2004 the European Commission registered the designation Arbroath Smokies as a Protected Geographical Indication under the EU's Protected Food Name Scheme, acknowledging its unique status. Arbroath Smokies can only be called this if they have been produced using traditional methods [haddock, smoked with wood, covered in hessieen cloth usually) within an 8-kilometre radius of the town of Arbroath in Angus, Scotland.

To gain protected status, foods must be linked to a specific geographical area or be made to a traditional recipe. For example, only cheese made in Italy's Parma region can be called Parmesan, and Single Gloucester can only be made in Gloucestershire. 'Yorkshire Feta' had to rebrand itself as 'Fine Fettle Yorkshire Cheese' after Greece's Feta cheese won protected status.

Protected-name status is highly sought after as it provides legal protection for a food's name, guaranteeing the quality and authenticity of the product. It also boosts tourism in the area of origin and can mean extra financial backing from Brussels to champion products. The scheme, set up by the European Commission (EC) in 1993, is modelled on the French appellation d'origine contrôlée system, which controls wine names.

It has three ratings. Foods can obtain: a Protected Designation of Origin (PDO), if completely produced or processed in one area; or a Protected Geographical Indication (PGI), a less rigid classification which means at least one stage of production is linked to the area; or a Traditional Speciality Guaranteed (TSG), for foods which aren't geographically named but have distinctive historic or customary features. -via TheIndependent

Classic 8o's stylings above... A related mention should go to another town's smoked haddock; the Finnan Haddock or colloquially Finnan Haddie, named for the fishing village of Finnan in Scotland, where it was originally cold-smoked over peat. This preparation requires further cooking though, whereas Smokies are fully cooked and ready to eat. Kedgeree (speaking plainly, leftover rice and curry w/ haddock added; for breakfast) and Cullen Skink (haddock chowder basically -v tasty -offputting name) both rely on these Scottish smoked haddock preparations. #must_know. #fantastic.