The first filmed Batman was a 15-chapter serial released in 1943 by Columbia Pictures. It starred Lewis Wilson as Batman. William Austin was the butler Alfred.

The films are notable for providing two core elements of the Batman mythos;
1) "The Bat's Cave" with Grandfather clock entrance -the name was altered to the Batcave in the comic.
2) here, the character of Alfred had a trim physique and sported a thin mustache while the contemporary comic version of Alfred was overweight and clean-shaven. The original Alfred was also a wannabe detective, not the Jeeves-type character he became... The comic version of Alfred was altered to match the potrayal by William Austin.

The 1943 serial has been rereleased; as below. (Major echo in the fantastic BatmanvsPreditor of a few years back) 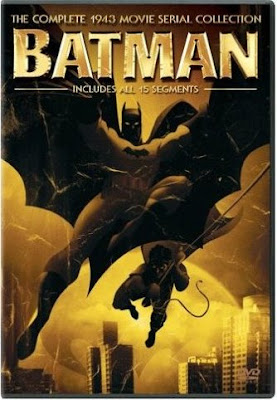