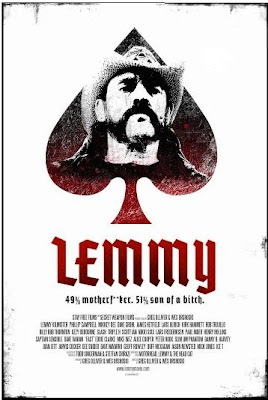 Not a metal fan at all but Lemmy Kilmiste is bordering on national treasure status, his dry humor probably has a lot to do with it. (Little nugget I just learned; after being fired from Hawkwind in 1975 he formed Bastard. When his manager informed him that a band by that name will never get a slot on Top of the Pops, Lemmy changed the new band's name to Motörhead –the last song Lemmy had written for Hawkwind... classic.)

Anyhow this doc Lemmy has been doing the festival rounds a bit and will play next Friday in Somerville at the Independent Film Festival (great line ups generally). NSFW trailer below. Personality? He has it in spades... [not funny -ed.]