Converted bakery trucks are fine, a restored International Harverster Metro would be neat, but how about Appalachian mountain riders as your bookmobile service? As a feature of the Works Progress Administration (WPA) of the 1930's that was the case.

Thousands of people lived in the crooks and hollows of Kentucky's mountains. Without newspapers, telephones, or radios, they were almost totally isolated from the outside world. Since there were not paved or even gravel roads, the only way in was by foot, horse, or mule. People followed creek beds and mountain paths to their tiny communities and homes in the hollows.

Small one-room schoolhouses nestled in coves and mining camps were almost entirely removed from the outside world. These schools barely had enough textbooks for their students. Some had no books at all. In face of the daunting essential needs, food, clothing, medicine, employment, funding for libraries seemed a very low priority. Without enough money to feed their bodies, how in the world could money be found to "feed their minds?" asked First Lady Eleanor Roosevelt. The answer came in the form of an ingenious WPA program known as the Kentucky Pack Horse Library Project. -via Josephine's Journal

Photos below via the New Deal Network, a research and teaching resource on the World Wide Web devoted to the public works and arts projects of the New Deal created by the Franklin and Eleanor Roosevelt Institute (FERI). [daywrecker warning -ed.]

Carrier at a Mountain School, 1938

Checking Out Books to a Carrier, 1938

Trails are Rough For the Pack-Horse Librarian, 1938 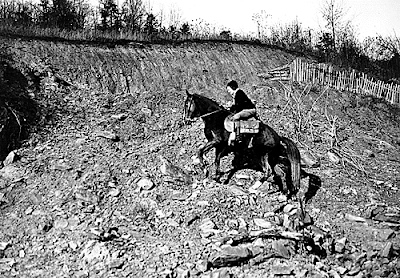 Visit From the Pack-Horse Librarian, 1938 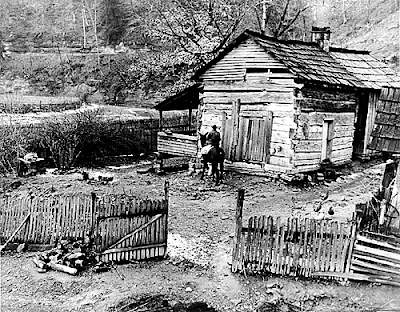 Pack-Horse Librarian Reading to an Illiterate, 1938

"When demand for materials exceeded the supply, scrapbooks of magazine clippings, anecdotes, local recipes, and newspaper clippings were made by the librarians as additional resources for the collection. These became very popular in the region, enough so that patrons began making scrapbooks of their own recipes, family history, sewing patterns and child-rearing advice for circulation by the pack horse librarians throughout the community.

By 1936, handmade and donated materials could not sustain the circulation needs of the pack horse patrons. Surveys of readers found that pack horse patrons could not get enough of books about travel, adventure and religion, and detective and romance magazines. Children’s picture books were also immensely popular, not only with young residents but also their illiterate parents. Per headquarters, approximately 800 books had to be shared among five to ten thousand patrons." via -Appalachian History

Found the following detailed and photo-filled work about the pack-horse program; Down Cut Shin Creek: The Packhorse Librarians of Kentucky, co-authored by Jeanne Cannella Schmitzer and Kathi Appelt. The whole history is pretty fascinating... 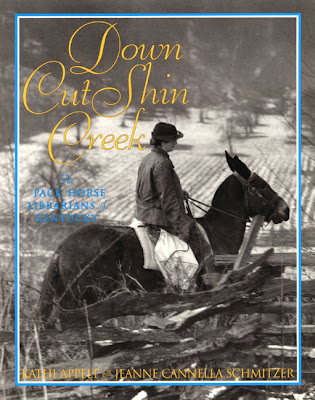