But until last week bourbon was the one thing I would not drink. Maybe not a huge fan of grappa either... but would never touch bourbon. No bad experiences, just did not like it. That rule is gone now though... and not just with the mixer of LateOne's (as Ale-8-One colloquially know.) According to wiki this cocktail would be called a gray squirrel. My contact in Kentucky had never heard that term but damn it sounds so good I'm sticking with it. Sidenote: love the whole story of Ale-8-One (sort of ginger ale, but less carbonated) as well, further reading. 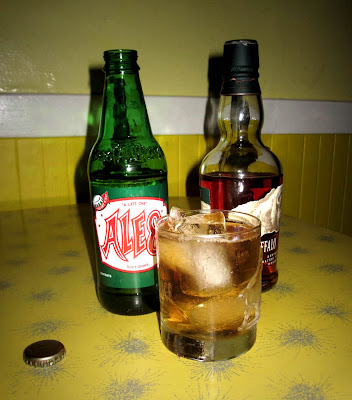 Tried the bourbon mixed (gray squirrel) and neat. My noob tasting notes: neat; smokey in a charcoal way rather than the peat fire way of whisky, some summer heat on the throat, and small vanilla and straw. V v nice. Again, until last week I did not go for bourbon atall so pleasant surprise. You can read some more formal tasting info here. Pretty excited to get on the trail of this most American of liquors now. Thanks Whit.