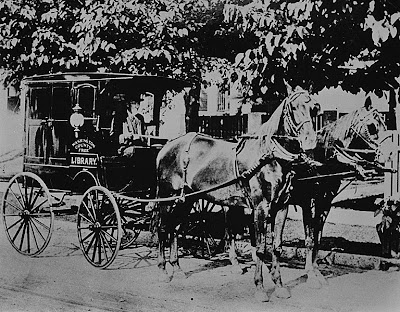 The first bookmobile in the United States was introduced in Washington County, Maryland in 1905. Mary Titcomb, the first librarian of Washington County Free Library, Maryland, considered seriously the need for the library to become a County Library. Her task was to get books in homes throughout the county, not just in Hagerstown, the county seat.
-via Western Maryland's Historical Library

Titcomb believed that libraries should reach out to the surrounding communities. She set up 22 deposit stations for the Washington County Free Library in store fronts where libraries could drop off requested books and patrons could pick up such books. Within five years, the number of stations grew from 22 to 66.

The deposit stations were popular, but Titcomb wanted to reach out to the larger potential patron base that was not aware of such services or perhaps did not care. The bookmobile was founded in 1905.

Miss Titcomb later wrote in The Story of the Washington County Free Library;

Would not a Library Wagon, the outward and visible signs of the service for which the Library stood, do much more in cementing friendship? [could not agree more -ed.]...

The first wagon, when finished with shelves on the outside and a place for storage of cases in the center resembled somewhat a cross between a grocer's delivery wagon and the tin peddlers cart of by gone New England days [Miss Titcomb was born in NH in 1857, apprenticed in MA and was a librarian for 12 years in Rutland VT]. Filled with an attractive collection of books and drawn by two horses, with Mr. Thomas the janitor both holding the reins and dispensing the books, it started on its travels in April 1905.

No better method has ever been devised for reaching the dweller in the country. The book goes to the man, not waiting for the man to come to the book.