No, The Golden Spurtle is not some kind of Harry Potter celebration (though slightly snicker inducing name... I mean come on) it is in fact the 16th Annual World Porridge Making Championship.

"The 2009 annual World Porridge Making Championships will take place in Carrbridge, Inverness-shire, Scotland, on 'World Porridge Day', Sunday 11th October 2009. The competition is organised by the Carrbridge and Vicinity Community Council. The main sponsor is oatmeal producers Hamlyns of Scotland." -via GoldenSpurtle.

The spurtle (also called a theevil by the threadcounting crowd) is a wooden stick used to stir porridge (synonymous with oatmeal). Wood so it won't mark or scratch your pots and pans. Stir clockwise. Made of beech, sycamore or maple they are inexpensive (around $10??) and bring a little WTF to your cutlery drawer... 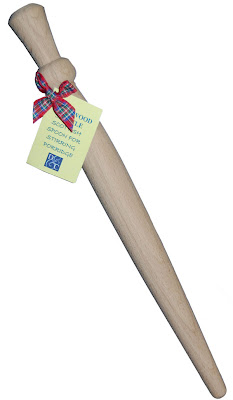 Incase you were not aware, in Scotland it is traditional to have salt on your porridge rather than syrup or cinnamon/apple or sugar or whatever. It really is what you are accustomed to though, and we have plenty back-to-the-land friends that can't face salt; but Oma eats it that way. We have caved and use maple syrup...