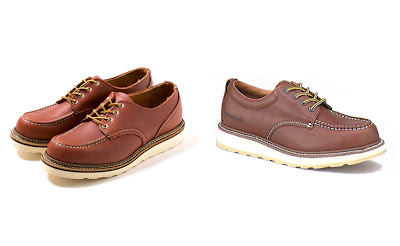 I burned through a pair of the DieHards 2 years ago, and reviewers say that the soles are still a little wimpy... Wish Sears would buck up and make these shoes that can take a beating but maybe that is why they are $60 not $200 or whatever the Red Wings turn out to be. More on the tasty Red Wing oxfords via HYRCollective.

"In 1967, Sears revolutionized the automotive battery replacement category with the introduction of DieHard. The battery's tough, thin-walled translucent plastic case was 50% thinner than conventional black, rubber- type battery enclosures available at the time. The result: bigger plates, more acid and extra starting power. More than nine years of research and development was conducted prior to the launch of DieHard in 1967." -via Sears

"The name DieHard came about after the battery underwent intensive testing without failure. Technicians did not report a single failure in more than 26,000 starts at temperatures ranging from sub-zero to more than 100 degrees. Sears marketed DieHard through a series of innovative advertisements ranging from batteries frozen in ice, to batteries in Baja racecars.