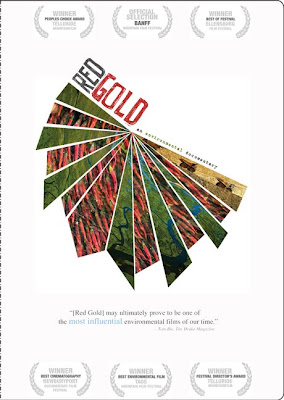 "The Bristol Bay region of Southwest Alaska is home to the Kvichak and Nushagak rivers, the two most prolific sockeye salmon runs left in the world. Mining companies Northern Dynasty Minerals and Anglo American have partnered to propose development of an open-pit and underground mine at the headwaters of the two river systems. The exploration site is the second largest combined deposit of copper, gold, and molybdenum ever discovered and has an estimated value of more than $300 billion.

Despite promises of a clean project by officials, the accident-plagued history of hard rock mining has wrought one of the biggest land use battles Alaska has ever faced. Documenting the growing unrest among native, commercial, and sport-fishermen, Red Gold is a portrait of a unique way of life that will not survive if the salmon don’t return with Bristol Bay’s tide." -abstract via Red Gold Film.


Interviews with people on the ground. Saw a clip walking through the Orvis store earlier (they and Patagonia are sponsors for this) had not heard of it till today. Felt Soul Media (the filmers) have a bunch of other great stuff; check their vimeo.