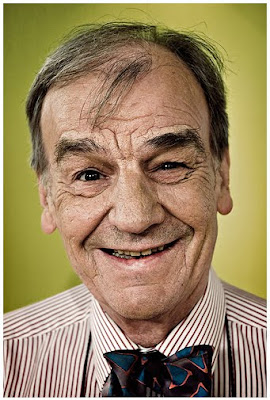 Not as well known in the US; but the British, Francophile, bon vivant personality Keith Floyd died yesterday. Keith was huge in the 80's in Britain for his slightly shambolic tv cooking shows and was the first to do them in set-piece (you know, cook for a football team on the pitch of a stadium, that sort of thing) that is common place now. Equally famous for swilling wine throughout the show (and getting slightly tipsy as the takes progressed) Keith was ever dressed in a fantastic collection of bow ties. He pushed fish and respected regional or peasant cooking wherever he went (when not setting the hotel on fire and then inviting the jakes in to eat afterwards). This was how to cook; swig some wine, fry things up and relish local ingredients. Obituary in The Times.

Nice bit in The Telegraph too; "Floyd's programmes dispensed with the static formality that had defined the television cookery of his forerunners, such as Fanny Cradock. Indeed they rarely took place in anything that could be defined as a studio. Instead he was likely to be found braced over a camping stove on the heaving deck of a North Sea trawler, rhapsodising over a sea bass. At the time it was revolutionary.

So too was his penchant for ad libbing jocular instructions to his film crew. A generation of viewers became familiar with Clive and various other long suffering cameramen, who were forever being ordered to get in close for a look at a fish gill or the marbling on a steak. "Back to me Clive," was a familiar refrain."