"Kitchen dances used to be a common part of life in rural New England. With no television and few movie theaters, the local dance was often the only entertainment around. Although most towns offered occasional large public dances, most dancing took place at the kitchen junkets; also called kitchen tunks.

The kitchen was used because it was generally the largest room in the house. All the furniture would be removed —including the stove in summer —and the fiddler would be placed out of harm’s way, maybe in a doorway or even the sink." -New England Fiddles.

"The men chipped in to pay the fiddler, and the women brought the lunch—sandwiches, cake and coffee. After barn chores, around 9, everyone arrived and threw their coats onto a bed, which usually also had a few sleeping children on it... The dancers filled the kitchen, and sometimes spread out into other rooms, dancing until way past midnight, when they would pile back into their sleighs for the ride home." -via Old Stone House

A few years ago I picked up a fantastic documentary (on VHS no less) called The Unbroken Circle which traces traditional and country (not C&W) music in Vermont, from radio cowboy bands to contemporary square dancing and callers. The producers followed up by releasing a great cd, Kitchen Tunks. 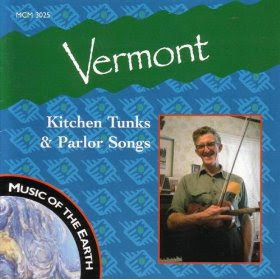 "Recorded from 1984-86 in homes and at community events by folklorist-musician-educator Mark Greenberg, "Vermont: Kitchen Tunks and Parlor Songs"... Many of the songs provided home-made evening entertainment for rural Vermonters before the dominance of mass media, while many of the tunes provided the music for Saturday night kitchen tunks, farmhouse parties with friends and neighbors dancing to old-time tunes played live by local fiddlers, harmonica players, and other musicians." -via Mutlicultural Media.

The selections reflect Vermont's Yankee and French-Canadian traditions as well as the impact of Southern styles and popular music... fiddlers, harmonica, sing songs ranging from childrens ditties to comic tales to hymns, whistling, a foot-operated piano "rig," and square-dance calls.